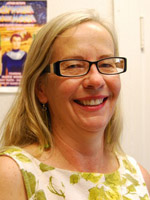 Marie Lathers is Treuhaft Professor of French and Humanties.  She received her Ph.D. from Brown University.  She is the author of three books:  The Aesthetics of Artifice: Villiers’ L’Eve Future (1996); Bodies of Art:  French Literary Realism and the Artist’s Model (2001); and Space Oddities:  Women and Outer Space in Popular Film and Culture, 1960-2000 (2010).  She has also translated Gilbert Doho’s People Theater and Grassroots Empowerment in Cameroon (2006).  She is the author of articles in reviews including The Romanic Review, Feminist Studies,Woman’s Art Journal, Frontiers: A Journal of Woman Studies, French Civilization, and Mosaic.  She holds an MA in English literature from Case Western. She teaches all levels of French language and literature, including Medical French, and Sages seminars on women in outer space, space travel in film and literature, and the Hunchback of Notre-Dame.  She leads the French spring study abroad service program in Montreal..  She has received the NEH Fellowship, Summer Stipend, Summer Seminar Grant (for The American Academy in Rome) and Summer Institute Grant(on Flannery O’connor);  a Fulbright Teaching and Research Award (Cameroon) and a Camargo Foundation Fellowship (Cassis, France).  At Case, she has received the Mortar-Board Top Prof Award.