Ana Izquierdo is from, Asturias, Spain.  She has a degree in Technical specialist in Stone Applied Arts by la Escuela de Art of Oviedo.  In addition to her formal education, she completed two years of training with the sculptor and painter Vicente Santarúa.and also studied five years in la Academia Painting Compasso de Oviedo.
She is a painter who specializes in portraits done in oil and pastel and also designs and paints interior murals.  Her work has been featured in several exhibitions and art galleries.   Ana is a self-taught writer and uses her skills to write narrations about her paintings.  She is very passionate about writing and painting to the extent that she has dedicated her live to this work.  She was the founder, coordinator and teacher of drawing and painting courses for several organizations in Asturias for the last 22 years with great success.

THE FREEDOM OF A DREAM 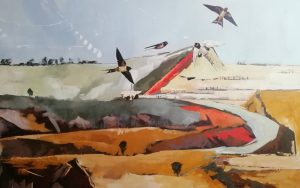 As a child they told him that this man, whom he saw every afternoon under the willow of the square, had been left mute in a dream. They recounted that he, realizing that he was dreaming, decided to take flight, but  he made it so high that a vulture ripped out his vocal cords by putting his beak through his mouth, open to breathe the high clouds.

For Seventy years,  he haven’t thought about that old story. But now the old man was him, and he wondered if he would not be a good colophon for his life to sit like Jonah under the willow, and tell his neighbors the lucid dream that returned him to his land.

Day by day, he dreamed and woke up like everyone else in that place. Men and women stepped on their place, breathed, and searched their identity.

He didn’t talk there. The space was closed and the murmurs of the old bounced from one fly to another until the last one fell into his hands and he approached his ear made him sing the last dances with Aurora. That’s how he remembered his life with her, the whole life of the two of us.

Now she was far away, not only dead, but far away. I wanted to draw her face, but in that aseptic place it was impossible. I needed the land, mountains, trees and swallows flying high guaranteed the sun.

That night he lay down wishing, like the last few weeks, to have his lucid dream. And he slept. And he dreamed. The space opened to his eyes in a red tablecloth and someone hugged him from behind. He looked at him and a kind mask but of those perpetuals he gave back a smiling and questioning look.

“I’m dreaming.” And how Jonah wanted to fly. He propelled himself, in disbelief, and he flew. Arms  overhead and afraid to plunge back into a useless sleep and wake up like every morning with a handful of pills in one hand and the blood pressure monitor in the other.

“I’m going to my land.” And from above I was watching the dark city pass, the highway full of sad lights to those who wanted to shout that Jonah was right, that fear disappeared, that love for Aurora would take him home, that he would gladly give his eyes, his ear, his touch after that.

And he reached the cloudless blue sky of his house. And he saw Jonah’s willow. He sat under its shadow and his sight became  full. And it wasn’t just him who was a swallow anymore.

The nurse entered Liberto’s room in the morning. He was still asleep. He breathed and smiled, but he couldn’t wake him up.

I didn’t know why she was there.

Standing and faceless on a crowded street.

Her life and memories had become the same stained reflection that the  storefronts returned to her.

Invisible to all the people who too hastily walked past her, pushing her with weary faces and drooping arms, felt the pull of a black thread coming out of her head that caused her to levitate  above  the asphalt.

And she entered a park full of trees, of wet earth, but there were no smells, no sweet scents when breathing  in the flowers.

The black thread pulled her back, but with the irrepressible desire to contradict it, she sat on the edge of a pond. Leaning over the water, her face began to  appear distorted and drooping. And behind her were reflected the faces of more people attached to black threads that, like hers, were lost in a sky sealed by clouds.

The gods didn’t like the intricacies of their commands seeing the light and all the haze of an ocean fell over her. Her blind eyes sought with her smell the scent of old clothes, the scent of dry skin.   she sensed when his face emerged from the pond, and she extended her arms to hug h, bony hands grabbed hers where they sweetly dropped a handful of red seeds.

It was then that she heard her voice, a hoarse voice, a dying voice of a tired woman: “You have come to burn the black city. You’re here, unknowingly, trying to renovate this hungry land. I will dispel this mist and before you will emerge a staircase that you must climb in silence. It destroys what the gods have created for you and you will lead to a new life cycle that will connect you to the whole.”

And in that very instant the light was made.

And she observed the sad crowd, the buildings in black, the trees that remembered in serious rictus their smiles from centuries ago.

And yes, there were the stairs. Constructed of ink, with shining screens, depicting hate  stories and murders. Step by step she climbed  to the top, where only one treeless branch grew, to which she tightly grabbed. In her head the ideas became clear, but the gods became nervous and waved their black thread, and moved it back and forth so that she would fall back into the world. The leaves of her branch were falling at her feet forming a pyre between red and brown that moved in small waves and from which a melody emerged with the hollow sound of what is far away in time.

She knew what she had to do. She was an instrument of the goddesses of the earth.

She threw the red seeds into the pyre and a flame rose in a small swirl. She just had to purse her lips, and blow lightly, and the fire reach the first step, and then the second, and came to the black city growing in waves that brought darkness and carried orange light that destroyed everything  there.

From the embers she recovered a seed. Throwing it into the air, it fell over the landscape  now barren and a red thread connected  to it from below.

Now the struggle between the gods above and the goddesses of the earth  it would remain bloody and fierce.

She’d be moved by both sides. She would resist the pull of the black thread that joined her to the gods and  control the red thread that would renew the cycle for all who were born among the fallen leaves day by day.